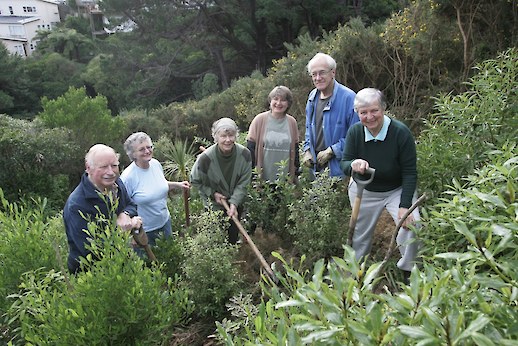 Trelissick Park in Wellington’s Ngaio Gorge is bursting with birdsong and native plants are flourishing thanks to years of hard graft by the Trelissick Park Group. They want to keep it this way and are keen to recruit a new generation of volunteers to help care for the park.

Trelissick Park is located in and around the valleys of the Kaiwharawhara and Korimako Streams and includes the Ngaio Gorge. It is a large expanse of hillside, valley, stream and parkland.

Upgrades of storm water and sewerage pipelines that run through sections of the park and natural events like slips and erosion have seen native vegetation disturbed and washed away on numerous occasions. Over the years a suite of troublesome weeds has been able to get established in areas bared this way, including tradescantia (wandering willie), montbretia, Japanese honeysuckle, old man’s beard, sycamore, flowering cherry, buddleia, blackberry, Himalayan balsam, pampas grass, climbing dock, ivy, bindweed, Australian wattle and willow.

The Trelissick Park Group has met on a regular basis since being set up by Frances Lee in 1991. For more than 25 years now they have battled with the weeds that threaten the natural values and health of the park and have planted an astounding 90,000 native trees and plants in cleared and exposed areas.

Chair of the group Peter Reimann says with ground cover weeds more under control and the council’s pest control taking effect, natural regeneration is starting to kick in.

‘The growth of the plantings is incredible as well. It’s returning the park to a beautiful wilderness area and making it a much nicer place to visit,’ Peter says.

‘There are more birds, such as kereru, tui, fantail, the odd kaka, and we have even heard bellbirds on occasion. This area, together with Zealandia, is bringing the joy of birdsong right into the city,’ he says.

Peter has noticed that more people are using the park these days.

‘There are good walking tracks and it is an off-leash area for dogs. I think with tradescantia more under control people feel happier about walking their dogs there.’ (Some dogs can be very sensitive to tradescantia.)

The group of mainly retired residents organizes working-bees on the first Sunday afternoon and second Tuesday morning of each month.

‘A core group of about 10 turn up at each working-bee,’ Peter says, ‘but some of us are getting on in years. We want to encourage another generation of weed warriors to join in and help with the care of this beautiful park and community asset.’

Peter would love to hear from groups, individuals, families, and anyone else who has time to commit and is keen to get stuck in and help look after nature.

Further information can be found at www.trelissickpark.org.nz, or contact Peter Reimann on
04 938 9602 or at Enable JavaScript to view protected content..

To find out more about groups busting weeds in your local area, go to www.weedbusters.org.nz.

The council-owned park is part of the ecological corridor between Wellington Harbour and the city’s outer green belt and contains areas of original forest.

It is named for the Cornish estates of Captain Daniell, who settled in Ngaio in the 1880.

This media release was issued by Weedbusters NZ, an awareness-raising and education programme that aims to limit the negative impact weeds have on New Zealand’s environment, economy and human health. Weedbusters NZ supports and promotes the efforts of community groups working to reduce and control the spread and establishment of invasive weeds.