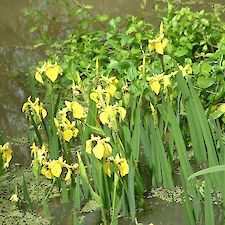 The yellow flag iris, Iris pseudacorus L. (Iridaceae) is an attractive ornamental plant that has rapidly turned into a weedy invader of wetlands and riparian zones. It is an emergent perennial macrophyte, native to the Palearctic zone (Europe, northern Africa and western Asia), but has been introduced to almost all the ecozones of the world; including the Neotropics (Argentina, Chile, Uruguay, Paraguay), Afrotropics (South Africa), Neartic (United States, Canada), Indomalaya (Japan), and Australasia (Australia and New Zealand) as an ornamental pond and garden plant. After escaping cultivation this alien species became highly invasive and damaging in several different environments. Wetlands are particularly vulnerable to I. pseudacorus, where the plant reduces native biodiversity and alters the hydrology by reducing water flow and trapping sediment in its rhizomes. In time, this species can form monocultures which modify the structure and functioning of ecosystems. In urban environments it obstructs drainage systems, as well as in agroecosystems, where it also competes with crops and can be toxic to livestock.

The study of an invasive aquatic species like I. pseudacorus is of particular relevance in Argentina, South Africa and New Zealand, where the presence of I. pseudacorus has been reported by several authors in natural and artificial wetlands but the current real distribution remains unknown.

Accurate knowledge about the distribution of invasive species is essential to initiate management programmes, however, sampling efforts are often insufficient and cover only a small area of the actual distribution. Citizen science, the involvement of volunteers as field assistants in scientific projects, has recently been employed to increase data collection on invasive species distributions through social media and online platforms. The use of citizen science becomes especially relevant in invasive species projects, not only because it allows scientists to obtain spatial and temporal databases at low cost, but also because it contributes to increased environmental education and social awareness of the dangers of invasive species.

On the other hand, the research on potential biocontrol agents against invasive wetland plants like I. pseudacorus is fundamental as a management tool, especially when mechanical removal or chemical control is unsuccessful. These potential agents - usually herbivorous invertebrates or fungal pathogens - are considered as biocontrol options due to their host specificity and the high level of damage to the target weed. However, biological control programs are still scarce in some countries and is still considered controversial for some citizens. Recently, a biocontrol programme targeting yellow flag iris has been initiated by Rhodes University, South Africa, in collaboration with the National Scientific and Technical Research Council (CONICET), Argentina and Manaaki Whenua – Landcare Research here in New Zealand. However, gathering information about the real distribution of yellow flag iris in these countries is needed. To address this issue, an online survey has been created to obtain information about the distribution of yellow flag iris in Argentina, South Africa and New Zealand using citizen science as a tool. The survey will also help to obtain general information about the social perception of the concepts of invasive alien species and biological control, and to determine any differences in perception between these three countries. The survey is open to all New Zealanders to take part in. Your contribution is greatly appreciated!