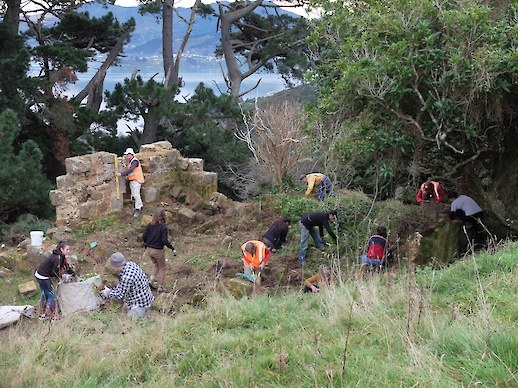 Allan’s Farmstead is one of a number of historical farmstead sites on the Harbour Cone Hereweka, which together form part of a significant historical/archaeological landscape that relates to the early European settlement and farming of the Otago Peninsula. These historical values (along with other values such as landscape, recreation, ecology) are one of the reasons that this area of land was purchased by the Dunedin City Council.

The historical/archaeological features of Harbour Cone Hereweka are being protected and managed by a Trust, and a conservation plan is being prepared. In the meantime, essential recording and maintenance work has been carried out on a number of historic sites, such as Roger’s Farmstead, Larnach’s Farmstead and Allan’s Farmstead, by members of the Otago University Anthropology Society, which is run entirely by students. This work will ensure that these features are protected and interpreted for visitors to the site.

Peter Petchey became involved with the overall project as an archaeologist contracted to carry out heritage reports on several sites and structures. Weed clearance at Allan’s Farmstead was needed to allow recording and maintenance/stabilisation work to be carried out on the ruin by archaeologist Carl Murray and stone mason Stuart Griffiths.

Work is ongoing on an overarching conservation plan, plus more detailed work on individual sites. Work to conserve and maintain the historic timbers structures and stone ruins on the Harbour Cone Hereweka property will continue for the foreesable future, but it is intended that each site will be stabilised to reduce deterioration. There is further clearing of periwinkle required on a more extensive old farmstead, Rutherford’s Farm.

Peter was delighted to be able to borrow loppers, secateurs and hand saws for the day for his 20 students from a toolkit funded by the QEII Community Weedbusting Project and looked after by the Save the Otago Peninsula Conservation Trust.

Having these good tools available to community groups means that more weed work will be done on the Otago Peninsula.