Weedbusters isn’t about the ‘nuisance’ weeds that pop up in your vege patch or flower garden - these are annoying, but tend to be a problem only in areas under cultivation.

Weedbusters is about the invasive plants which have a harmful impact on the wider natural environment, on our economy, and on human and animal health.

There are a lot of different terms used for these plants by different organisations for different reasons. The Department of Conservation lists a few ‘environmental weeds’ which pose the most serious threats to the ecosystems they are looking after. Regional councils and unitary authorities also have lists of ‘pest plants’ (or ‘plant pests’) which are of particular concern for their areas. There are also ‘NPPA species’ that are banned from sale, propagation and distribution under the National Pest Plant Accord.

For simplicity’s sake, we refer to ALL invasive plant species as ‘weeds’.

Why worry about weeds? 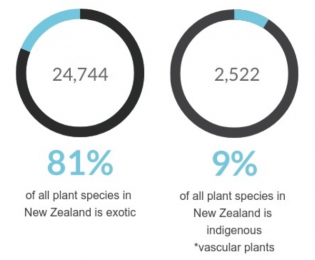 How weeds are introduced

Over 75% of the weeds of conservation were originally deliberately introduced to NZ as garden plants.

Most of the spread of weeds in New Zealand is because of people.

If left uncontrolled, weed problems expand exponentially - and so does the cost of dealing with them.