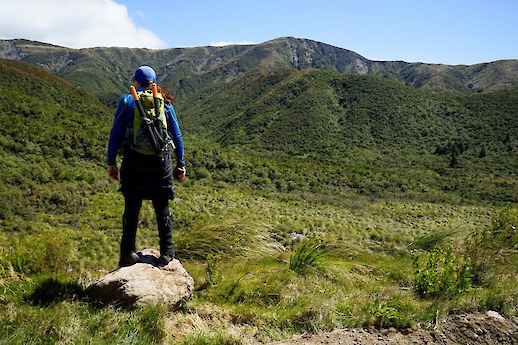 The Posse is led by Palmerston North locals, Anthony Behrens and Fiona Burleigh, who have long been regulars in the Ruahine Forest Park, both as keen trampers and through their involvement in a stoat trapping programme that protects the whio/blue duck.

It was while taking part in these activities that they began to notice wilding pine seedlings springing up in open areas in the Park. Their concern turned to alarm when they saw how prolific they were becoming and how fast they were growing.

Wanting to do something about it, they roped in some friends and formed the Palmy Pine Pulling Posse. That was back in 2016. The group of around 10 friends have stuck to their mission ever since, pulling out smaller wilding pine saplings and cutting larger ones down before pasting the stumps with herbicide whenever they happened to be in the park.

“Initially we had a grand vision,” Anthony explains.

“We wanted to clear the whole open area of wilding pines, but realized that we simply didn’t have the numbers of people on the ground to achieve that.”

Instead, they concentrated their efforts on clearing a 10 hectare area around the carpark at the end of Kashmir Road.

In three short years, the Pine Pulling Posse has removed an incredible 10,000 wilding pines from the 10 hectare patch.

It can be hard work at times, Anthony says, but pulling wilding pines is really rewarding because the results are instant.

“We have done what we set out to do and I am beside myself with pride with what we have achieved.

“The area that was just grass and wilding pines back then is now swamped with toi toi and manuka, and cabbage trees are starting to come in. The regeneration means there isn’t enough light to allow any more wilding pines to establish there,’ he says.

DOC predicts that 20% of New Zealand will be invaded by wilding pine forests within 20 years without rapid action. Wilding conifers currently cover more than 1.8 million hectares of land and are spreading at an estimated rate of 5% a year.

The Palmy Pine Pulling Posse are living proof that a relatively small group of keen weedbusters can make a huge difference in helping combat invasive and destructive weeds like wilding pines.

There are hundreds of community groups doing similar work around the country. If you are interested in setting up your own project or joining an existing group, check out www.weedbusters.org.nz or www.naturespace.org.nz. There’s lots of helpful information and resources there to help you get started.

All around New Zealand, communities, private individuals, local government, central government, and research organisations are actively involved in Weedbusters work. This includes active control of weeds, as well as education about invasive weeds and pest plants.

The Weedbusters programme celebrates the efforts of these individuals, communities and organisations, and aims to spread the message that each of us has responsibility for stopping the spread of weeds.