Restored wetland an amazing visual gift to the community

By QEII Community Weedbusters Project, 18 May 2017 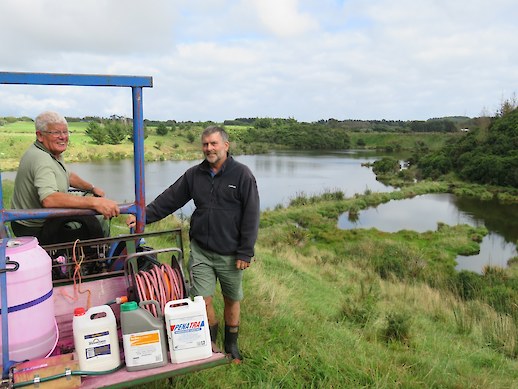 A once tired, damaged wetland near Otaki is now bursting with birdlife and native plants thanks to Graham and Patricia Booth’s efforts to restore it to its former glory.

In 2001 the Booths bought 8 hectares of land north of Otaki on State Highway One for their retirement, but they weren’t planning to sit back and take it easy.

Graham set out to restore the clogged up wetland area on the property that had been pumped and drained for pasture for many years. Sixteen years on the area is flourishing, birds have returned, and naturally regenerating native plants are thriving.

Graham recognises the threats animal pests present, but is adamant that weeds are the biggest challenge he has faced in maintaining the health of the wetland.

‘Weed control is my number one focus. If I didn’t keep at it, I reckon the area would be devastated within 5 years’, says Graham.

‘I can’t emphasis enough what a major threat weeds are to a restoration project like this if left uncontrolled.’

Glyceria at the wetland’s edges is particularly hard to tackle, he says. It forms a smothering mat, and spreads underground, preventing rushes and other natives from emerging naturally.

The 8ha area was accepted for covenanting with QEII in 2003. The area is a breeding ground for dab chicks, and habitat for shags and the royal spoon bill.

The QEII Community Weedbusters Project (QEII CWP) has given Graham a supply of weed spray to help him out.

John Williamson, QEII regional representative for the region, says the weeds are pretty endemic in the area and he is delighted to have been able to offer assistance through the QEII CWP to help Graham keep them under control in his wetland.

‘The Booths’ wetland is an amazing visual gift to the community, and a haven for water fowl as well,’ says Mike.

‘We are very happy to be able to support this inspirational restoration project.’