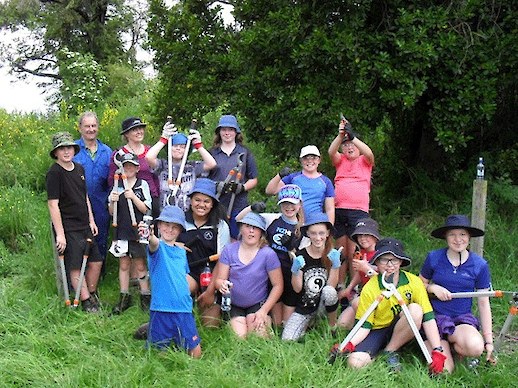 Armed with saws, secateurs and Subway sandwiches, Springburn School students were a formidable force at Staveley Camp for a pre-Xmas weeding bee.

These students are the first to take part in a new weedbusting programme devised by Staveley Camp to help look after the 10ha forest remnant that surrounds the camp. This remnant is the eastern-most patch of mountain beech left in the entire Ashburton district, and a rare reminder of what forests in the area once looked like.

Year 6 and 7 students spent two days tackling weeds in the 10ha forest remnant just before school broke up for the year, under the watchful eye of camp committee member, Barry Marett.

‘So many kids from Canterbury haven’t even seen bush before,’ says Barry.

‘We wanted to devise a programme of activities that would get students into the bush, engaged with nature, and learning about threats to our biodiversity.”

Weeds are one of those threats, and this first weeding bee targeted seedling sycamore trees which are spreading throughout the bush remnant.

Funding for tools, herbicide gels and gloves came from a $2000 grant from the QEII Community Weedbusting Project which was organized by local QEII rep, Alice Shanks.

‘I really liked what the Staveley Camp committee wanted to achieve and wanted to support their initiative,’ says Alice, who gave the students the safety briefing before they started their weeds work.

‘This funding is not just about weed control, it’s an investment in a community initiative that will engage our next generation of caretakers and show them how to help look after these special places.’

Local Subway staff also chipped in with a free lunch for students to reward their efforts.

‘It’s a great example of a different way the community can get on board to help make a difference, and the kids loved the treat after all their hard work.’

‘We want to encourage groups like the Staveley Camp Committee who are working with their local communities, because when you get collaboration like this on tackling weed issues, that’s when really exciting progress starts to happen’, says Carolyn.

Future weeding bees are already being planned, including clearing young sycamore seedlings for up to five years to deplete the seed bank.

Ash, rowan, grey willow, cotoneaster, spindleberry, Darwin’s barberry, and ivy are other weeds that will need to be tackled in future to give seedlings from trees such as wineberry/makomako, putaputaweta, broadleaf/kapuka, kotukutuku/fuchsia and horeka/lancewood the chance to renew the forest.

The Staveley Camp committee will be approaching other mid-Canterbury schools inviting them to join in on the programme. If you are interested in getting involved, contact can be made through the Staveley Camp website www.staveleycamp.co.nz or by calling Barry Marett on 027 208 8482.

Located around 40km north-west of Ashburton, Staveley Camp is a popular site for schools and youth groups who station themselves there before tramping the nearby Mt Somers walkway. The camp’s grounds include the forest remnant that is protected with the QEII National Trust. Most of Canterbury’s forests were cleared around the beginning of the 19th century, making this remnant block pretty special. It is the eastern-most patch of mountain beech left in the entire Ashburton district and a rare reminder of what forests in the area once looked like.

Not so special are the invasive weeds that are infiltrating the forest and threatening its health. The explosion in weeds can be blamed in part on Cyclone Ita that struck in 2014 and a big wind and snow event in 2015 that brought down a number of trees, producing light wells and ideal conditions for weeds to take hold.

A number of weeding projects have been carried out over the years with funding from ECAN and Ashburton District Council, and the Staveley Camp committee, a voluntary group that manages the camp’s activities programme, has put considerable effort in themselves trying to keep the weeds at bay. It was clear to the members, however, that ongoing action was needed to get on top of the problem. They began exploring ways to address the issue and came up with a plan to expand the camp’s activities programme to include environmental education opportunities in the forest, and for ways for the students to get involved and help look after it.

Staveley Camp’s weedbusting project is one of a number of initiatives being supported through the QEII Community Weedbusting Project, which is funded under the DOC Community Fund.