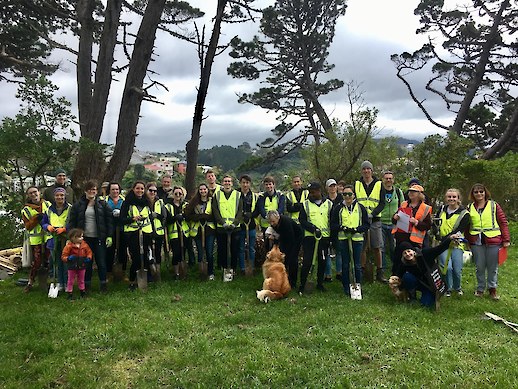 A recent UN report made it clear that the environment globally is in dire straits and transformative changes are needed to restore and protect threatened ecosystems.

It is hard not to feel overwhelmed by this news, but we can be inspired by the many community-based conservation groups all over the country that are ‘thinking globally, acting locally’ by restoring and caring for nearby natural areas.

TGRP’s spokesperson, Denis Asher, helped kick start the project back in 2014, after locals at a community meeting expressed a willingness to help clean up and look after the park.

In the years since, this has involved removing decades of rubbish dumped illegally in the park, pest and weed control, and replanting native species.

The group’s vision is that this ‘wilderness’ area will, in time, resemble the native forest it was before Pakeha arrived in Wellington.

Busting weeds is a first crucial step in any restoration project of this nature, and Tanera Park has a full suite of local weeds to deal with. Volunteers have put a sustained effort into tackling old man’s beard, tradescantia, blackberry, ivy, cathedral bells, montbretia, convolvulus, and Darwin’s barberry, amongst other weedy invaders.

‘And they’re just the smaller offenders,’ Denis says. ‘There are also large exotic trees that need to be removed: wattles, wild cherry trees, and bay laurels, for example. There are some really old macrocarpa and pines in the gully as well but we are leaving those for now as they pose minimal wilding risk, and are valuable roosting places for kaka, kereru and other native birds.’

‘Wellington City Council has given us support along the way. We were really happy to recently get further funding from it which meant we could get a specialist gang in to focus on the bigger trees. We were then able to come through and clean up after they had done their work.’

‘Unless you keep at it, weeds like old man’s beard reinvade from seed sources nearby. It’s growing all across the valley in private gardens and unfortunately, due to other pressures, it isn’t prioritized much in council weed control programmes. That’s why we have a side-campaign going on to target it, and wattles as well – one thing we do is offer to come and help local residents get rid of these weeds from their gardens,’ Denis says.

Alongside weed control, the TGRP also has a successful predator control programme in place. They have caught rats mainly, and some mustelids.

‘It is pretty disconcerting, though, to see how many domestic cats hunting in the park our motion cameras have picked up,’ Denis says.

TGRP’s vision was in part inspired by a presentation given at the community meeting by Te Papa’s Jean-Claude Stahl. Jean-Claude spoke about early settler records that described ‘crimson-red’ Christmas-Eve hillsides surrounding Wellington harbour. That was the northern rata blooming.

‘A sight not experienced in recent times. We now have introduced pohutakawa throughout Wellington, which is in fact outside of its natural range. It’s the northern rata that actually belongs here naturally,’ Denis says.

Rata was well on the way to becoming locally extinct due primarily to settler fires and browse damage, especially by possums. It is one of the species the group are returning to the northern-facing slopes at Tanera Park, with support from a joint Remutaka Prison nursery and Project Crimson initiative and the Department of Conservation.

On the eastern-facing slopes, trees like matai and miro are being planted and barrier species such as hebe and carmichaelia, a scented native broom, are being put in around the perimeter of the group’s restoration area.

All the plants are eco-sourced, coming from local Council and Forest & Bird nurseries.

By creating a healthy habitat that connects to other significant existing conservation projects nearby, including the Karori Sanctuary, Otari/Wilton Reserve, and Te Ahumairangi Hill, TGRP hopes they will soon reap the benefits as birds and wind spread native plant seeds from these biodiversity banks into Tanera Park.

‘The restoration work has conservation outcomes, but it also makes the park a much more pleasant place to visit, enjoy, and learn about the local environment,’ Denis said.

‘Our objectives are as much about conservation as they are about aesthetics and quality of life for all the valley’s residents and other people wanting to visit our parks and connect with nature,’ Denis says.

Up to 12 volunteers regularly work at the Park, weeding, trapping and planting. On the first Sunday of the month, TGRP holds an open volunteer working day (from 2:00pm) when sometimes more than 20 people can turn up to help.

‘Over time the park will become a really beautiful place to visit. If you are interested in helping out, or are a local resident and would like help with controlling old man’s beard or wattles on your property, give us a call. We would love to hear from you,’ Denis says.

More information about the Aro Valley Restoration Project and other community conservation groups in Wellington and around the country can be found at www.naturespace.org.nz

More information about weeds and weedbusting can be found at www.weedbusters.org.nz