Evergreen shrub or small tree (<8 m) with branches covered with reddish hairs, and long, leathery, dark green, shiny, smooth, aromatic leaves (4-11 cm x 1-2.5 cm) tapered towards the base, with rolled edges that become serrated towards the rounded tip. Flowers are on short, branched spikes amongst the current year's growth; male flowers are in small, hanging clusters near the branch tip, while small, hanging clusters of female flowers are further from the branch tip. Red-black fruit is only slightly fleshy and is warty in appearance.

Overseas it is a fast-growing tree that forms dense invasive colonies, out-competing native species. Tolerates partial shade, a wide range of soil types from thin ash over lava to deep well-developed silty clay loam, and is a nitrogen fixer so it can colonise poor soils. Wind-pollinated, and seed production is prolific (from 40,000 to 400,000 fruits per year); seed remains viable in the soil for a long time. Not yet naturalized in mainland New Zealand.

Fruit is spread by birds and animals.

Invades early regenerating forest and shrublands, and alters the chemistry of the soil by fixing nitrogen, allowing for subsequent invasion by other weeds. Forms a dense canopy with a sparse understorey by shading-out other species and preventing canopy regeneration.

Monitor the site for regrowth from the base and seedling growth. 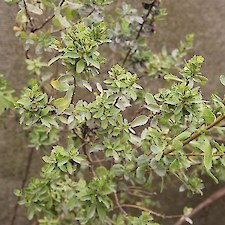 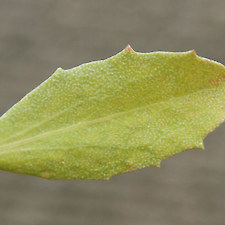 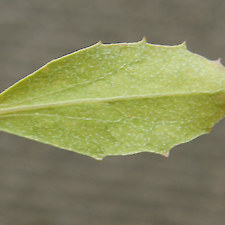 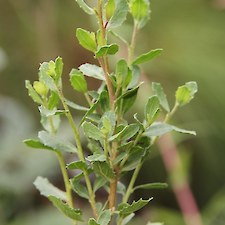