Erect, colony-forming, summer-green perennial, primitive fern-ally (<2 m tall) with extensive, deep, freely branching rhizomes. Ridged, hollow stems that occasionally branch and feel hard and rough. The stems are jointed and break easily at this point. Leaves are reduced to toothed sheaths that encircle the joints along the stems, with a black ring at the base. The stems have a distinctive black collar at the joints. Extensive underground rhizomes (underground stems). Spores produced in cone-like structures on fertile stems (rather than flowers and seed heads) ? looks like a strange asparagus spear. It is sometimes kept as an ornamental plant due to its unusual appearance.

Field horsetail (Equisetum arvense) also has fertile stems that look asparagus-like, but they are shorter than ones produced by rough horsetail. Sterile stems of field horsetail resemble pine seedings.

Spreads rapidly, re-sprouting from underground stems, and displacing desirable plant species once established in an area. It is resistant to most herbicides and underground rhizomes make it hard to control.

Underground rhizomes are spread by movement of soil or through deliberate planting.

Prefers moist areas such as gravel areas and pond/lake margins but once it is well established, it will adapt to a wide range of conditions. It can even be found growing through the cracks in concrete.

Report all sites to your regional council or local Department of Conservation office.
1. Dig out and incinerate all parts and contaminated soil. 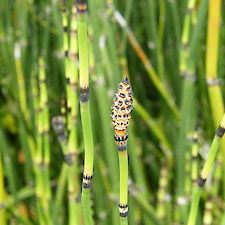 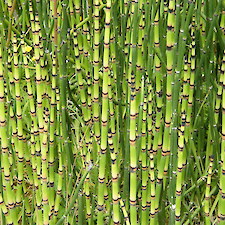 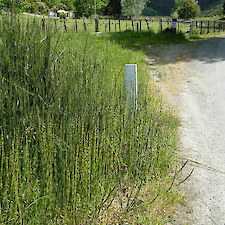 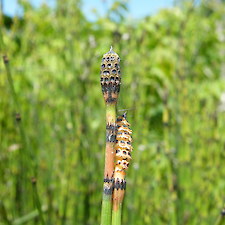 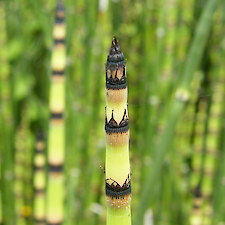 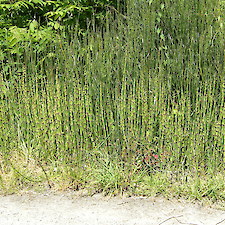