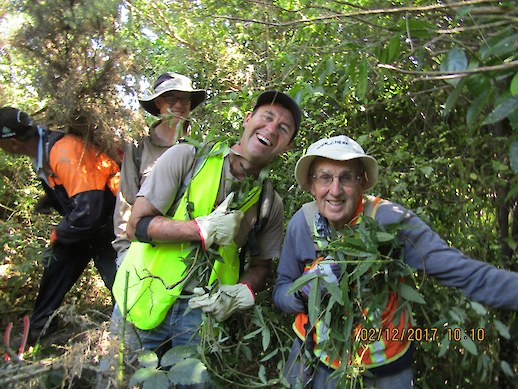 Every month South Canterbury Conservation Trust volunteers, aka the Geraldine Passion Killers, head off to Kakahu Bush to spend the day there weedbusting.

All sorts of weeds are tackled by the group on these excursions, but it’s the passionfruit vine that has been getting a particularly hard time ever since the group decided over 10 years ago that this species would be the focus of their weedbusting efforts.

At the time the attractive ornamental plant had grown to large proportions throughout the QEII covenanted bush. The South Canterbury Conservation Trust knew that the vines had the potential to swamp canopy trees and block out light needed for understorey regeneration.

A decade on and hundreds of volunteer hours later the Passion Killers’ passion for killing the invasive vine has resulted in some great canopy recovery and natural regeneration is looking assured.

Just before Christmas local QEII rep Rob Smith joined the group, handing over a fresh supply of herbicide and some new tools, bought with funds granted by the Weedbusters NZ Community Weedbusting programme.

He’s impressed with the results in Kakahu Bush.

‘These folk bravely go where no one has gone before, using their clippers to cut paths through gorse, blackberry and bush lawyer, often well over head height, to get rid of the passionfruit vine weed,’ Rob says.

‘I take my hat off to them. They have really made a positive impact on the bush and the plant is now quite hard to find,’ he says.

Geraldine’s Kakahu Bush has interesting natural and historic features and is open to the public. It contains rare fossils, balancing rock geological features, a granite bluff and limestone cliffs. The bush is home to abundant birdlife including rifleman, kereru, bellbird, fantails, tomtits. Long-tailed bats also live there. An historic lime kiln built in 1881 is located nearby.

Jointly managed by the South Canterbury Conservation Trust and the Department of Conservation, the 360ha bush area is protected by two QEII National Trust covenants. One covering around 200ha was established by the South Canterbury Conservation Trust who fundraised and purchased the block of land that was originally part of a farm. The Gama Trust bought the remaining 160ha farmland and bush block, covenanting the bush before donating the area to the Department of Conservation. (The lime kiln is a separate small reserve protected by Heritage New Zealand and administered by the Timaru District Council.)

The Passion Killers’ weedbusting work complements a long-term trapping project run by ECan to control possums, mustelids and rats. These programmes have together helped maintain bird and bat numbers in the bush.

The Geraldine Passion Killers usually meet on the first Saturday of the month. If you are interested in giving them a hand, meet at the historic limestone kiln on Hall Road at 9.30 am. Bring food and fluids and wear prickle proof clothing for protection. Any questions, call John Talbot (03 614 7896) by 8.30 am on the Saturday morning. For car-pooling from Timaru, call Fraser Ross (03 684 3382).

This media release was issued by Weedbusters NZ, a multi-agency awareness-raising and education programme that aims to limit the negative impact weeds have on New Zealand’s environment, economy and human health. Weedbusters NZ supports and promotes the efforts of community groups working to reduce and control the spread and establishment of invasive weeds.